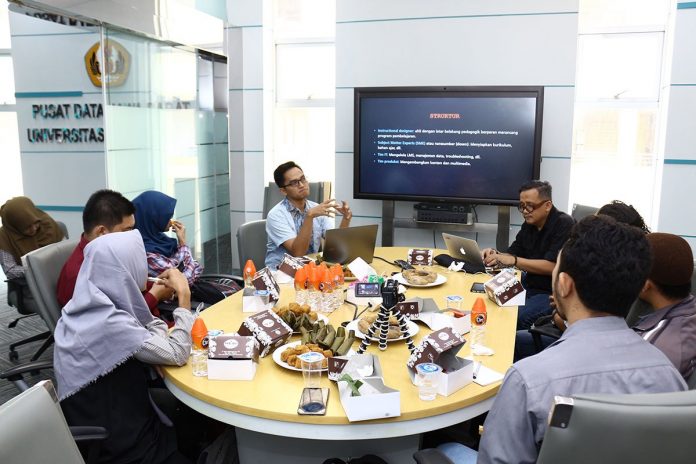 Bandung – Towards Industrial Revolution 4.0 where Information Technology held an important role in any bussiness Process,  The Capacity of ICT Manager in University needs to scale-up. Based on that, Technical Service Units (UPT) Centre for Information Communication and Technology (ICT) Maritime University of Raja Ali Haji (UMRAH) conducted a visits in terms of Competency Upgrading to Padjajaran University (UNPAD) and Bandung Institute Of Technology (ITB) Tuesday (18/9) until Thursday (20/9) in Bandung, West Java

The group of ICT UMRAH, amounting to eight people, was led by the Head of Sub Division of Administration ICT UMRAH, H. Azmi Sanjaya Putra, S.Sos.

On the First Day Competency Upgrading Visit, Tuesday (9/18) to Padjajaran University in the Unpad Rector Building in Jatinangor, the ICT UMRAH group was welcomed by the Secretary of the Directorate of Planning and Information Systems (DPSI), Alan Ridwan Maulana, S.Si., M.Kom .

The ICT delegation was immediately invited by Alan to review the UNPAD integrated Service Center Room which is located on the 1st floor of the Unpad Rectorate which is often the purpose of visits to comparative studies of Universities in Indonesia. This integrated service center resembles a One-Stop Integrated Licensing Service (PTSP) counter.

“Students and lecturers, as well as staff, are served here, so there is no need to come to the office of the work units that are served in the integrated service center. Diploma taking is also done here, except for legalized diplomas, “Alan said.

In the discussion that took place at the West Java Data Center Meeting Room DPSI UNPAD, Alan conveyed how the Technology and Information System processes were at UNPAD. Then Rafly Chalil, Head of the Directorate of Facilities and Infrastructure of UNPAD explained how the infrastructure facilities of Information Technology UNPAD such as datacenter and information systems that serve the process of facilities and infrastructure. Then about E-Learning in the form of Blended-Learning also delivered by Ryan Hara Permana, MN. from the Directorate of Academic Resources and Unpad Library.

The group of ICT UMRAH was then invited by the DPSI UNPAD to visit the UNPAD Center data at UNPAD Campus Dipati Ukur and then discuss how UNPAD conducted an Android-based Mobile Assisted Test (MAT). Initially the visit itenary to the Unpad Data Center was scheduled on Wednesday (9/19) but because UNPAD was carrying out a series of Anniversary, the DPSI Unpad directed visits to the UNPAD Data Center at the same day.

Azmi Sanjaya Putra said that the MAT had the opportunity to be applied at UMRAH because of limited space and computer unit capacity.

After visiting UNPAD, Thursday morning (9/20) ICT UMRAH visited ITB in Tamansari Campus. The UMRAH ICT delegation was welcomed by the Head of the Sub-Directorate of Information Technology Services at DTSI ITB, Mugi Sugiarto S.Si., MAB and the Head of Operations and Information Technology Facilities Section, Beni Rio Hermanto ST, MM. In the DSTI ITB room on the 4th floor of the Center for Research and Community Service (CRCS) ITB.

“We welcome the arrival of the team from UMRAH, to discuss with us about Information Technology services, hopefully a lot can be learned from us and we can also increase knowledge from UMRAH,” said Mugi.

Mugi then explained the information systems available at the Bandung Institute of Technology, including the Oracle database used. According to Mugi, ITB also uses its own applications, besides using state-owned applications such as LPSE which is used by the logistics directorate in charge of procurement.

“While E-Learning was under our unit, now it is focused on being a separate UPT, namely UPT E-Learning,” said Mugi.

After exchanging souvenirs, the UMRAH ICT group was then invited to visit ITB’s data center on the 1st floor of the CRCS building. (Adi Pranadipa / ICT)